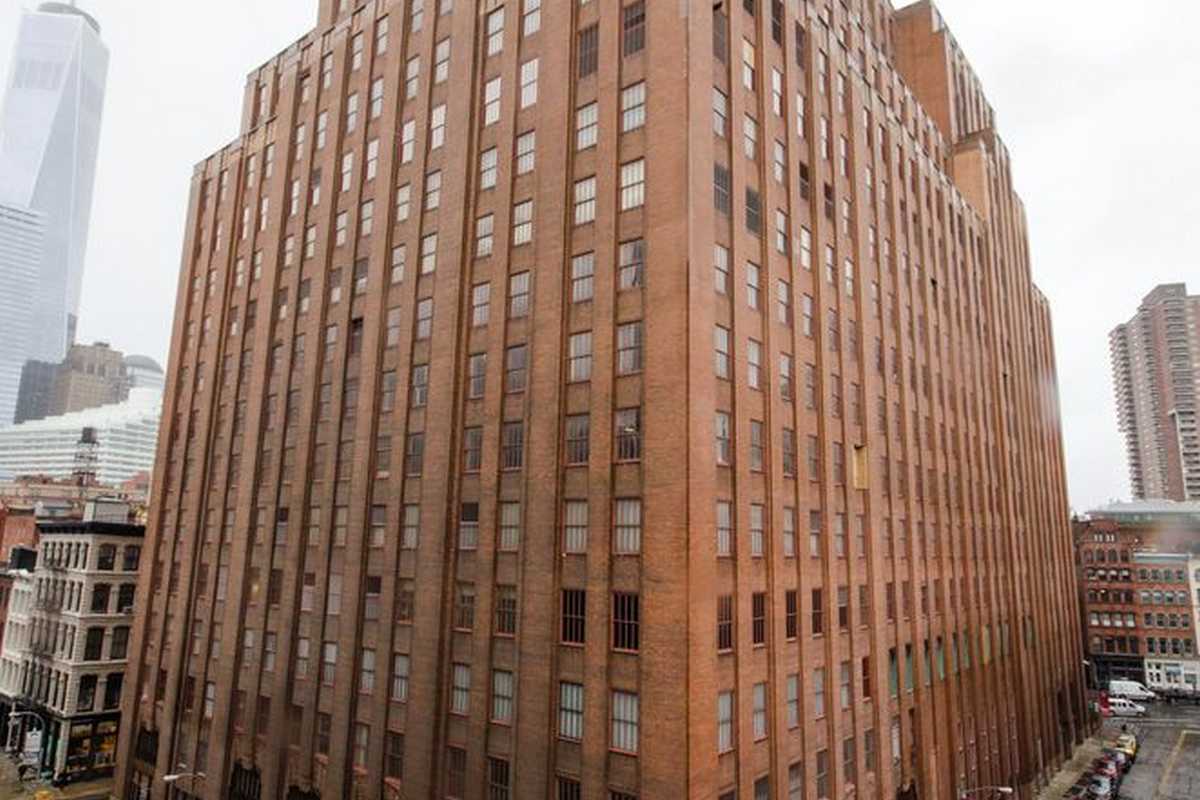 Tribeca’s artist-friendly lofts and studios have their origins in the neighborhood’s industrial beginnings. In the late 19th century, the trendy neighborhood was dominated by the Washington Market, a wholesale produce market that peaked in popularity and size around 1880-1910. Even in the 21st Century, cast-iron facades and creative use of brick continue to distinguish Tribeca’s architectural landscape. Though many buildings have now been converted into office complexes and condos, the neighborhood’s five historic districts still contain many remarkable statements of original Tribeca architecture.

When the Butter and Cheese Exchange of New York changed its name to the New York Mercantile Exchange in 1882, architect Thomas R. Jackson was brought in to design the new building. This five-story, vibrant red Queen Anne-style building at 6 Harrison St is part of the Tribeca West Historic District and features a gabled tower as well as rusticated granite pillars.

60 Hudson Street was the monumental headquarters of the Western Union Company from its construction in 1928-1930 until 1973. Its designer, prestigious New York City architect Ralph Walker, was influenced by German Expressionism and included Art Deco detailing. Nineteen tones of brick make up the ziggurat, darker colors along the bottom grading into lighter shades higher up. The building was designated a New York City Landmark by the Landmarks Preservation Commission in 1991.

Located at 49 White Street, the Tribeca Synagogue’s swooping concrete shell has been a distinctive part of Tribeca’s architecture since its completion in 1967. Architect William N. Breger designed it in the Formalism style to resemble an abstract eternal flame with a sky-lit sanctuary, but the shape has added benefits: its concave interior amplifies sound wonderfully without electrical assistance. The building has served an Orthodox Jewish congregation through three name changes: founded as the Civic Center Synagogue in 1938, the newly constructed building was named the Synagogue for the Arts before becoming the Tribeca Synagogue.

The iconic firehouse at 14 North Moore Street is most well-known for its appearance in the 1984 movie Ghostbusters (and its 2016 reboot). Built in 1903, architect and city superintendent of buildings Alexander H. Stevens designed it as one of New York City’s Beaux-Arts style firehouses, with Baroque style truck entrances. The building, which originally was a wider structure with two truck doors, was chopped in half in 1913 during the widening of Varick Street.

Amongst the decorative and significant pieces of Tribeca architecture stands Tribeca House, with luxury apartments featuring designs to suit every design preference. Contact us today to view the gilded arches of our Art Deco apartments or the minimalist mid-century structures and choose the apartment of your architectural dreams.